The Anatomy Of Light

In the real world, light falls on every object around us illuminating some portions and throwing other portions into shadow.  Understanding these effects are crucial for the representational artist.

The effect of light on a scene can be  very complex. The effect can range from subtle to dramatic. No matter the quality and effect, there is a distinct pattern of light, middle and dark value that is recognizeable.

This pattern can be re-created in a simple form on your watercolor paper to help create the illusion of light illumination and three-dimensional form on the objects you paint.

We’ll also cover the vocabulary that helps organize our thinking and identification of light and shadow.

Another important aspect of this lesson is the idea of simple shapes.  Simple shapes, like the sphere in this lesson, are the underlying form and structure of more complex objects.

It doesn’t take a lot of imagination to see the simple structure of a soccer ball, tomato, pumpkin, radish or even a human head in the form of a sphere.

These are the identifiable parts of the Anatomy of Light and the words used to describe them.

Form Light – the area of the surface that is receiving direct light. The  highlight, center light and halftone are all found in the Form Light

Highlight – this is usually a small ‘spot’ of that is a reflection of the light source. The highlight is  the lightest value within the  Form Light. The highlight may  be more or less distinct, or not apparent at all, depending on the reflective character of the object

Halftone – this area is least amount of direct light and has darker value than the Center Light.

Terminator – the edge that marks the boundary between Form Light and Form Shadow. This is often appears to be a soft edge, since the shift from Form Light to Form Shadow is gradual.

Form Shadow– the area of the surface that is turned away from the light. It can be referred to as ‘Shade’.  It includes the shadow core, and reflected (or bounced) light. This area has values that are darker than any in the Form Light.

Reflected Light – this is the lightest area of the Form Shadow and is so because some light rays are bouncing from objects and surfaces back into the Form Shadow. Reflected light is seen near the bottom and back edges of the object.

Shadow Core – this is the darkest area of the Form Shadow. It usually appears near the Terminator because there is not enough reflected light to lighten the entire Form Shadow

Cast Shadow– the area on the surfaces around the object that have direct light blocked at the Terminator. This area usually has the darkest values in the scene.  It includes the occlusion shadow.

Occlussion Shadow – this is darkest area of the Cast Shadow and usually occurs where two objects or surfaces meet and join.

This is a Premium Learning Library Lesson.  Access The Entire Library  With a Premium Membership – Cancel or Pause  at any time.

Already a Premium Member? Login Below

Learn To See And Paint Light And Form Learning Track 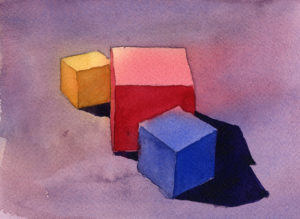 Recreating the effect of real world light on objects in a painting means creating the changes in color and value that simulate the real-world effect.

Although the effect of light has many, sometimes unexpected, visual impacts – there are certain, tried and true ways of creating patterns of light and shadow in our paintings. In turn, these patterns will seem to reveal form through the illusion of three-dimensions.

This Learning Track includes twenty lessons for understanding and showing the effect of light in paintings. The lessons start with basic ideas and use them to paint more and more complex scenes and subjects. 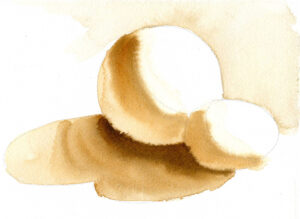 The lesson above paints a plain, simple sphere.  It is used to study the anatomy of light and some of the individual effects and is painted carefully and methodically to capture those effects.

In this lesson, we’ll paint two spheres using a looser approach to show how easy it is to acheive values and gradations that simulate the effects of light and shadow.

It’s also important to understant that most “rounded” objects also fit, roughly speaking, into the definition of sphere. These objects needs a very similar treatment in the handling of light and shade.

Paint A Pomegranate In Watercolor 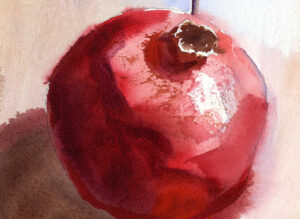 A Pomegranate is essentially a sphere.

This lesson is a quick study of a single pomegranate done quickly with really simple techniques.   It’s a painterly approach to the subject as well as to painting a sphere.

Like the lesson on painting two spheres, above, we’ll work with and let the medium create most of the light effects.

It’s also a great lesson for working with warm and cool reds.  We’ll work with and mix two common reds to come up with the right color for this bright subject. 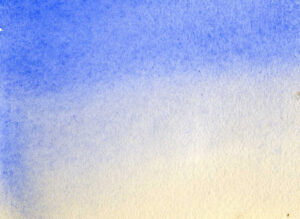 The Graded Wash should be an essential part of your watercolor painting repetroie.

It is used everywhere in the Anatomy Of Light Sphere painting, and Pomegranate painting exercises above.

These washes create beautiful and expressive passages in your painting. Even better, they are without peer when it comes to representing the subtle effects of shifting light that occur all around us in the natural world.